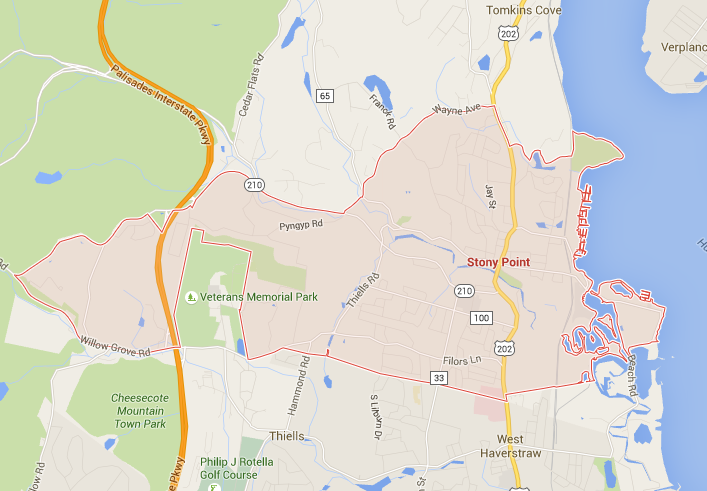 There is nothing like one level living! This BEAUTIFUL sundrench straight ranch is set way back on 1.60 of parklike acres and is a privacy seekers dream! Offers 3 bedroom...

Welcome to 77 Jay Street in Beautiful Stony Point beautiful New York! This home is located one of the prettiest well-established neighborhoods in the area and is highly s...

This home could be a sparkling diamond again! Enter the home to a grand staircase, large kitchen open to family room with fireplace, also on this main floor is a large li...

Your dream home has come into a reality! This newly renovated center hall colonial in the heart of Stony Point NY has 4 bedrooms and 4 baths. Designed with unique taste a...

Great opportunity to own this unique home nestled in privacy and situated on 1.84 acres of beautiful property. This center hall Colonial has charm and character and boost...

This is the home you have been waiting for! Move right in! This immaculate ranch has 3 bedrooms and 2 baths all designed with a classy modern touch. Open kitchen with sta...

Rare opportunity for Owner/Investor to purchase freestanding building in Stony Point. Bldg. includes 2 additional spaces which can be rented out for income to help pay ex...

BEAUTIFULLY MAINTAINED HOME! This home is updated and freshly painted and is ready for you to move in! The kitchen is updated with access to the deck for easy summer barb...

Welcome to Paradise! This 6 Bedroom, 3.5 Bath Colonial is poised to make all your dreams come true. Nurture loved ones, entertain friends or simply lay back and enjoy thi...

Welcome to Jay Street! You found your home sweet home! This bi-level is tucked away down a long driveway offering lots of privacy. It's warm and inviting and has a freshl...

Situated in the heart of Stony Point, this home offers everything you need. The foyer welcomes you, featuring sunny spaces and flow from room to room. The stunning brick ...

If you're looking for outdoor space you have found your Dream Home! Huge backyard and patio for entertaining!!! Beautiful 3 bedroom 1 bath Home with enough room for ev...

Just Pack your bags & Move into this All Renovated, Everything inside out Brand New house on a beautiful Cul-de-sac! 4 Bedrooms, plus a Family room, 3 Full bathrooms, Bea...

Home has been updated within in the last 5 years. Kitchen has granite tops and all stainless steel appliances. All wood floors throughout. Back yard all fenced in and pr...

A Move In Ready Hi Ranch in Stony Point is waiting Just for You. A great home for entertaining both in and outdoors. The Upper level has 3 bedrooms, 1.5 baths, a good siz...

Welcome to one of Stony Point's most historic and unique homes. Originally built in the 1870's, this lovingly maintained and expanded home has 4 bedrooms, 3.5 bathrooms a...

Incredible pieces of property like this one are rare finds! Are you looking for somewhere very special to call your home? Do you long for a property that is private and ...

39 Beach Road is a building lot with unobstructed river views and river rights. This property has riparian rights with 80 feet of road frontage and 500' from property lin...

Build your dream home in the highly sought-after Rising Hills, a private community, located in Tomkins Cove NY! THIS is one of the last pieces of land left to build on ...

STONY RIDGE ESTATES Land lot for sale (Not a house, just a lot) Foundation started and stopped. Great lot in a in a neighborhood of luxury homes. Approved plans for 4 be...

Private and serene mountain-top home nestled on 1.58 acres and surrounded by 600 acres of peaceful property owned by Camp Bullowa Boy Scouts and Suez Water Company. This ...

Located On 2 Acres This Home Offers All The Exclusivity That You Desire In Tomkins Cove. This Contemporary Center Hall Colonial with 4,000 square feet of living space ha...

THIS IS THE ONE! Don't miss your opportunity to move into this move in ready brick and tudor Colonial. This home boasts 4 bedrooms, and 2 1/2 baths. Entertain in your Li...

COME EXPERIENCE THE HUDSON VALLEY AT IT'S FINEST. GORGEOUS NEW CONSTRUCTION TO BE BUILT IN STONY POINT NY. INTERIOR WILL OFFER TOP OF THE LINE AMENITIES THROUGH-OUT , INC...

Well Maintained Bilevel in the heart of Stony Point. House sits on .37 of an acre with 3-4 bedrooms and 2 full baths. Plenty of parking. Possible 4th bedroom on lower lev...

COME EXPERIENCE HUDSON VALLEY AT IT'S BEST, EXCEPTIONAL NEW CONSTRUCTION TO BE BUILT ON 1.04 ACRES IN HIGHLY SOUGHT AFTER TIORATI TRAILS! INTERIOR WILL OFFER SOPHISTICATE...

Stony Point is a triangle-shaped town in Rockland County, New York, United States. It is part of the New York City Metropolitan Area. The town is located north of the town of Haverstraw, east and south of Orange County, New York, and west of the Hudson River and Westchester County. The population was 15,059 at the 2010 census.The name of the town is derived from a prominent projection into the Hudson River.The town is in the northeast part of the county. U.S. Route 9W, U.S. Route 202, and the Palisades Interstate Parkway are major north-south routes through the town. Stony Point is included in the North Rockland Central School District. It is the most rural out of the 5 towns in Rockland County.During the American Revolution, the King's Ferry in Stony Point linked New York and the southern colonies with New England; it was used many times by George Washington's Continental Army, and in 1781 Washington's French allies used it on their way to the Battle of Yorktown.The Stony Point Battlefield, just north of Stony Point, marks the July 16, 1779 Battle of Stony Point in which General "Mad" Anthony Wayne earned his nickname leading 1,350 Continental Army troops in a surprise attack against the 544-man British garrison at Stony Point. The Americans were unable to hold the fort for more than a few days.The economy of the town increased upon the rediscovery of limestone deposits in the 19th century. The town of Stony Point was founded in 1865 from the northern part of the town of Haverstraw.

The overall crime rate in Stony Point is 75% lower than the national average.
For every 100,000 people, there are 2.03 daily crimes that occur in Stony Point.
Stony Point is safer than 85% of the cities in the United States.
In Stony Point you have a 1 in 136 chance of becoming a victim of any crime.
The number of total year over year crimes in Stony Point has decreased by 48%.