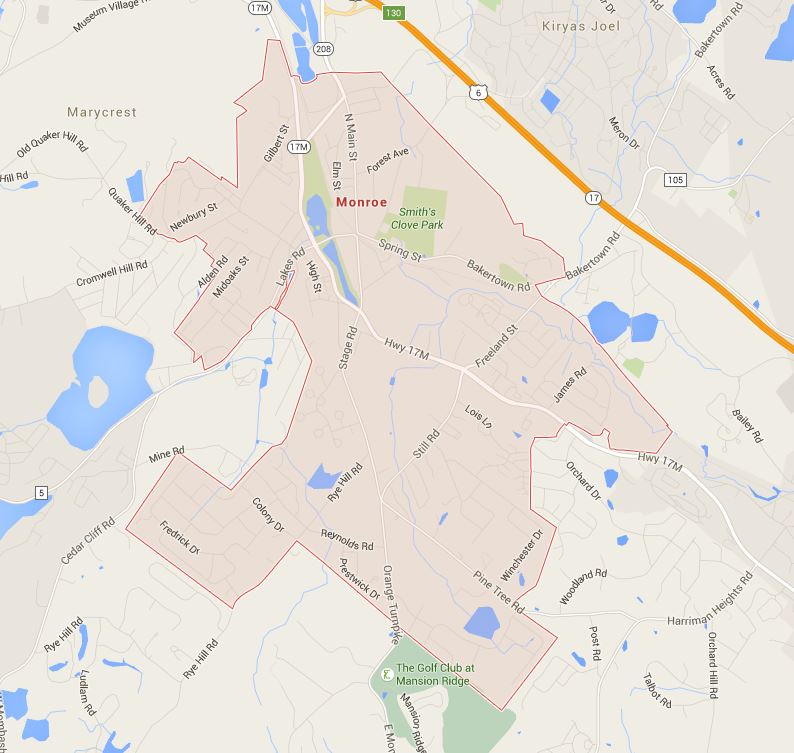 This private colonial in Monroe is absolutely breathtaking!! Quiet road, so much privacy, you feel like you are on vacation at home. This home is on almost .6 acres of la...

Walton Lake, Monroe, NY - RARE FIND! Get the best of all worlds with this Legal 2-Family located in the lovely Walton Park neighborhood of mostly single family homes. Liv...

Welcome Home! This adorable Ranch sits on a level, fenced yard, and has Lake Rights to Walton Lake! Originally built in 1949, as a 2-bed lake Bungalow Home, it has been l...

Spectacular contemporary home sitting on 1.2 acres of land. This home has been elegantly and tastefully renovated and decorated by its owner an interior designer. This ho...

Picture perfect home with lots of curb appeal. This bright and airy bilevel features 3 roomy bedrooms including a master en suite, Dining room plus an Eat in Kitchen. Gle...

Stunning split-level located on a quiet cul-de-sac, in the Town of Monroe! This gorgeous home offers a beautifully appointed chef's kitchen, with granite, stainless appl...

Welcome Home!!! This gorgeous colonial has great curb appeal complete with a rocking chair front porch, Trex decking in the front and the back, rock wall, wrought iron fe...

Comfort and convenience await you in this updated unit. Beautiful hardwood floors flow throughout. Kitchen with quartz counters, stainless appliances and breakfast bar ...

Talk about curb appeal......this baby has it all! Professionally landscaped and hardscaped, this striking 4 bdrm, 2.5 bth colonial in desirable Maple Knolls has been lo...

Why not Own, instead of Rent?! Great opportunity to buy this 1940's bungalow and either renovate while living in it, or use as an investment property~Originally built as ...

This is it...a cute little cottage in close proximity to the Harriman & Palisades State park area of Southern Orange County. Move in ready with all new appliances (may 2...

This beautiful home is located in the Town of Monroe on a quiet residential street. Upon entering, you will notice the totally renovated kitchen that really catches your ...

Spectacular colonial with 4800+ sq. ft. in Briarcliff Estates. Private backyard with stone fire pit, All the amenities you want are here. Large rooms,, kitchen with gra...

Imagine yourself living in this beautifully upgraded & updated, 3-level luxury townhome with 3164 square feet. It's conveniently located in the gated and prestigious Mans...

This pristine home on the fourth hole in Mansion Ridge golf course is move in ready. The first floor master suite comes complete with a luxurious bath and his and hers wa...

This is your chance to own a wonderfully built ranch in one of Monroe's best neighborhoods. Downtown, the grocery store, and the Round Lake boat launch are all within a m...

This is your chance to live in a true neighborhood gem! Nestled in a cul-de-sac on a quiet street, this Monroe Woodbury home offers plenty of space for everyone in an exc...

*Fully Available* Welcome to your new home! This beautiful townhouse-style condo offers the perfect combination of privacy and convenience. The lush, private deck is the ...

Simply Charming! Pride of Ownership is evident throughout this fabulous two story old style home. Sitting pretty on just under a quarter of an acre, right in the heart of...

Easy living at it's best! Welcome to the luxurious, gated community of Meadow Glen. Upon entering, you will notice the open floor layout, 9 foot ceilings, architectural ...

**MOVE RIGHT IN TO THIS WONDERFUL 4BR, 3 BATH HOME ON ALMOST ONE ACRE OF PROPERTY BACKING UP TO THE WOODS. FRESHLY PAINTED WITH BRAND NEW SIDING, THIS HOME HAS A SPACIOUS...

Opportunity waits for no one. Buildable lot in cul-de-sac with executive homes. Set at the end of the cul-de-sac and backing up to Mansion Ridge Golf Course. This lots ...

**FULLY AVAILABLE & READY FOR ITS NEW OWNERS, THIS 2BR END UNIT IN MONROES'S HIDDEN CREEK COMPLEX WAS BUILT IN 2011. THIS TOWNHOME, BACKING UP TO THE WOODS, HAS GRANITE I...

What a beauty in the village of Harriman. This beautiful home has been renovated from top to bottom with good quality materials from the plumbing, the electric wiring, ne...

Welcome Home! This very well maintained 4 bedroom, 2 and 1/2 baths bi-level is located in a wonderful neighborhood. Pride of ownership radiates throughout this home. This...

This year-round mountainside charmer is nestled in the woods yet close to all! This home offers 1 bedroom and 1 full bath, living room with vaulted ceiling, storage loft,...

Sitting on 1.6 acres, this well maintained, bright, move in ready, charming, oasis back yard and unique 4 bedroom floor plan, is a must see!! Entering through the main d...

This beautiful old soul of a house is longing for your love and attention! Built C.1890, Eastgate is an expansive estate-like property with sprawling lawns, hundred-year-...

This unique property and location suites all your needs. It's close to a 1/2 acre approved lot that offers the ultimate balance of privacy and community. Take advantage o...

Build your "Dream" home! * Looking for a Large, lovely, level 3.3 acre lot in an area of fine homes! Well and Municipal Sewer onsite, there was a home which has been re...

Your search is Over! This beautiful home will WOW you! An immaculate home w/over 4400 Sq Ft is Large, Bright! & Airy! The wrap around Front Porch provides stunning mounta...

RARE ONE-TIME OPPORTUNITY! prime location but private! Yes! this house is your dream come true with it being right next to the village of KJ Minutes walk to KJ shopping c...

Welcome to Prestwick Gardens Kensington model with over 4200sf of finished living space, featuring one of the largest dining rooms of a colonial this size. Enjoy a forma...

You could be the second owner of this beautiful Colonial style home in the quiet community of Monroe, NY. With an open-concept floor plan and over 3,000 square feet of r...

Easy living in Lexington Hills! This two bedroom, two bathroom unit has been beautifully maintained. Centrally located to everything you need...shopping, entertaining, di...

Bring the team, there is plenty of room in this five bedroom house. First level offers 9' ceilings, crown molding, an extra large eat in kitchen with all stainless applia...

This is the one! 6 beds, 3 full baths and nearly an acre of land in Harriman. This is not your typical raised ranch. This extended home features nearly 3,000 square feet ...

Come enjoy the tranquility that this land can offer, located in a private road with no traffic needing to pass by.

Desirable location in the Village of Monroe and fully leased units! Located in the Central Business District (CB) with many permitted uses. Close to Monroe Woodbury Schoo...

Close to transportation, shopping, and dining. Residential Lot. Need variance. Property land locked. No access to property. Owner of the property on 20 Margaret does n...

Recreational purpose only. Great location for nature lovers, fishing, canoe, or kayak. View of Walton Lake; Near lakes road .. Not a buildable lot. Additional Land on ...

Set in the gated community of Mansion Ridge, the original model overlooking the 18th hole of the Jack Nicklaus signature golf course. Completely renovated with no expense...

Monroe! PRIVATE LAKEFRONT--ENJOY SWIMMING, BOATING, FISHING AND THE BEAUTY OF NATURE! Enter through the STONE PILLARS to this Vintage 1935 colonial gem offering plenty of...

BACK ON THE MARKET! Welcome to this charming ranch house located on a quiet Cul-de-sac on the corner lot . This is your answer to a one level living! This beautiful house...

Commercial land, located in the B-2 General Business District, generous "permitted uses". including Office, Motel, Hotel and other uses. Municipal water and sewer in the...

Home is up and can be ready in 60 days or less. Springfield model features four bedrooms, two and a half baths, 9ft ceilings, hardwood floors, fireplace in the Family Roo...

Monroe is a town in Orange County, New York, United States. The population was 39,912 at the 2010 census. The town is named after President James Monroe.The First Settlers to this land were American Indians from the Lenni-Lenape Indian nation. The Lenni-Lenape nation consisted of three tribes, "The Unulactus, the Turkey tribe, Minsis, the Wolf-Tribe, and the Unamis, the Turtle tribe" (Welcome to Monroe). As white settlers started to move north the Lenni-Lenape nation was forced to move west, out of New York and New Jersey and into Pennsylvania, and later on into central North America, under the Treaty of Easton.
The Treaty of Easton was a colonial agreement signed on October 1758. The British colonial government of the Province of Pennsylvania and the Native American tribes in the Ohio Country signed this document stating they would be allies in the French and Indian War.In the early 1700s the lower Hudson Valley region was being mapped out to be divided up under the crown.
On March 25, 1707, the "Chessecocks Patent was granted by Queen Anne".The patent confirmed deeds that had been previously acquired by purchase directly from the Lenni-Lenape Indian Nation. The Patent was given to seven people, six men and one woman" (Welcome to Monroe). "Cheesecocks as a precinct included all of present day Monroe, Woodbury, Tuxedo, and Stony Point (Monroe New York). "Many of the patentees never saw the land they bought or were given".Many of the new settlers to come with the Cheesecocks Patent were Dutch, and English. Both groups of settlers came from Long Island to this unknown land for its "rich natural resources" (Welcome to Monroe)

The overall crime rate in Monroe is 32% lower than the national average.
For every 100,000 people, there are 5.56 daily crimes that occur in Monroe.
Monroe is safer than 66% of the cities in the United States.
In Monroe you have a 1 in 50 chance of becoming a victim of any crime.
The number of total year over year crimes in Monroe has increased by 16%.